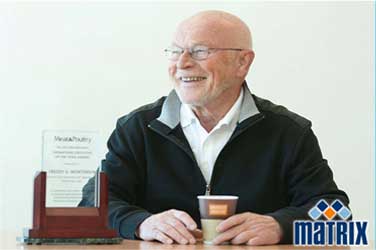 It’s not every day that you get to bring a superstar on board, but that’s just what Jim Wilson at Matrix Industrial Control Systems got to do recently when he welcomed industry icon Freddy Mortensen to the Matrix team. Few people in the meat processing industry are as well-known and respected as Freddy, and with knowledge and experience that few can match, Matrix’s consulting services offering just significantly increased in both range and depth.

Where do you start in describing someone as accomplished as Freddy Mortensen? How about going back to the beginning?

Freddy Mortensen began a butchering and sausage making apprenticeship in his home country of Denmark at the tender young age of 14 years old. Over the following 34 years, Freddy worked in a variety of positions in several different companies across the world, honing his craft and learning about every aspect of designing and operating a food processing facility.

In 1992 Freddy accepted his first position at Plumrose USA as a plant manager at their Booneville, MS facility. Over his career at Plumrose, Freddy quickly rose through the management ranks, ascending to become the Senior Vice President of Production and responsible for overseeing all things production across five of Plumrose’s production facilities.

Amongst his numerous career achievements, Freddy oversaw the design and building of two brand new facilities for Plumrose USA, the latest being completed in 2013 and boasting a throughput of 260,000lb of sliced ham per day. Through the adoption of industry leading innovation and technology, the newest Plumrose facility was staffed with only 90 workers, about 25% of the number of workers that facilities of comparable throughput employed.

Freddy’s excellence didn’t go unnoticed, as in 2013 he received the prestigious Operations Executive of the Year as awarded by the Meat & Poultry magazine.

One of the key values Matrix has always prided itself on is in delivering the best application of the technologies to create a real and measurable ROI in our customers organizations. Data Navigator, SmartForms, Navi-DASH are some of the most comprehensive software suites specifically designed to capture and analyze food manufacturing data in real time, and Matrix’s consulting services had previously focused on the best use of those technologies to create a significant ROI.

But with Freddy and his decades of expertise and experience overseeing our consulting services division, we can now analyze your entire food manufacturing process from beginning to end, including:

Having such a holistic view of your organization will allow the solutions that we provide to be so much more valuable.